Probably the oldest alcoholic drink in Korea is makgeolli. Until 1988 it was the most popular drink in South Korea, especially among farmers and workers. However, for some time now it has been celebrating a comeback among Koranic youth and even stars.

This unfiltered rice wine consists exclusively of fermented rice, yeast and water and usually contains between six and eight percent alcohol by volume. The fermented rice remains natural and therefore the drink has a slightly milky, unclear color.
In Korean culture, makgeolli is considered a "healthy" form of alcohol. Lactic acid bacteria and fiber make up around ten percent of the drink, which is why it is very popular among the elderly.

We have the original Makgeolli in our range as well as exciting flavored versions:

You can find the full selection here!

Makgeolli can be bought in plastic bottles or cans. But traditionally, it is served in a metal or wooden bowl. It should be gently shaken before pouring. It's a bit milky, semi-sweet and slightly carbonated due to the fermentation. It has a slight viscosity and the main aroma tastes like yeast in a pleasant dose. 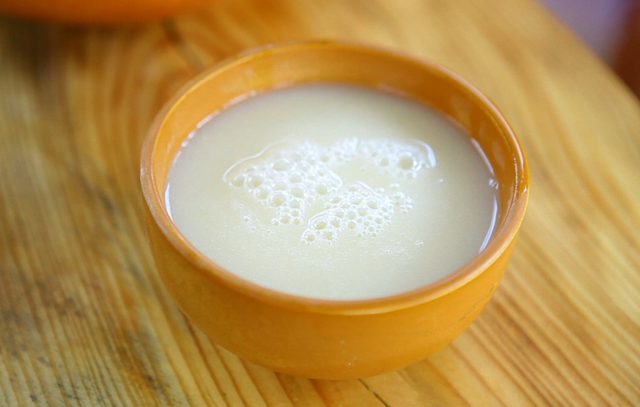 Makgeolli is called rice wine and sometimes rice beer. However, it tastes neither of wine nor of beer. It has a distinctive taste of its own. It is also an excellent companion for peppy chicken or noodle dishes. The creamy consistency of the rice wine plays so well with the spiciness of the food.
Makgeolli is considered a happy community drink. For this reason, a hearty toast and don't forget in the spirit of 007 - shaken and not stirred ;-D!